ボーイスタイル
Boystyle (ボーイスタイル), also known as Ouji (王子) or Dandy (ダンディ) depending on the substyle, is a fashion which, like Aristocrat, is frequently associated with Lolita; it is not considered a Lolita style, but shares many aesthetics with Lolita since it is the masculine counterpart of the style. Despite being the male equivalent of Lolita, boystyle can be worn by people of any gender, just as Lolita can be. It also can feature a lot of elements such as flowers, makeup and accessories, which are not seen as typically masculine.

In contrast to the ubiquitous knee-length skirt associated with Lolita, boystyle's distinctive look uses pants, which can come in varying lengths. The most common are knee length pants although shorter "pumpkin pants" and longer pants are also seen. The pants are inspired by victorian boy pants, which vary in length depending on the age. These are paired with blouses and vests, similar to to Lolita blouses under JSKs and often, but not necessary, paired with waistcoats. Boystyle comes in all colours and styles, since it has the same substyles as Lolita. Though most people settle on the gothic or punk substyle in black and white.

Accessories are just as much a part of the style as in Lolita, though in boystyle there are more accessories associated with masculine historical fashion, such as hats (top hats, pirate hats, military hats, etc), pocket watches, ties, and jabots, though they can also wear bows, crowns, flower headpieces, brooches etc. The amount and nature of accessories depends on the style, with less accessories in gothic, more and more colourful accessories in sweet, more royal accessories in ouji, more adult and masculine accessories in dandy and so on.

As it is focusing on a boyish look, shorter hair is common. Long hair is often worn in an up-do. Pigtails or other girly hairstyles are also worn, but not as often. Wigs can be a vital part of the look. 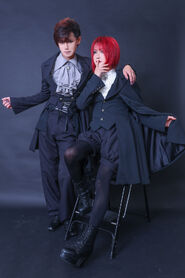 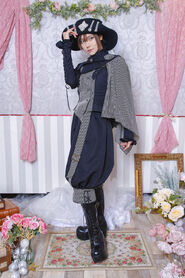 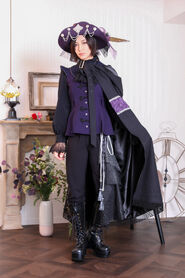 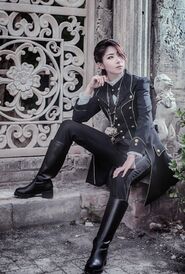 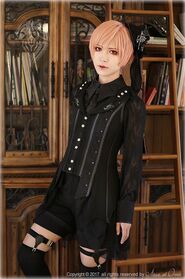 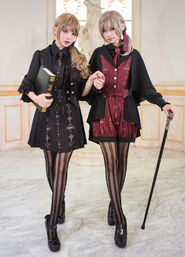