エロロリ
Ero Lolita (エロロリ) is a style of Lolita that focuses on outfits with a slight eroticism. It is considered a controversial style due to the fact that a lot of people who are unfamiliar with the style or Lolita fashion in general may get it wrong.

Although it does sound that it may be a little less modest and a little more tongue-in-cheek, this style does not involve suddenly only wearing lingerie or any less clothing. Ero Lolita shares the same silhouette as any other Lolita style but allows showing slightly more skin while also adding more fetish elements, like fabrics with leather or sheer appearance. Skirts for this style may be slightly shorter that most styles, but nothing overly provocative, and a petticoat is still worn as usual.

Makeup and hair for this style can be a little more mature, and a little less 'girly' than the other styles.

In general, the basic accessories are the same as in any other Lolita style. Accessories more unique to Ero Lolita coords include bondage chokers, fashion corsets and harness, cage skirts, and visible garters.

This is one style of Lolita that should not really be attempted by a beginner due to it being a more difficult style to pull off correctly. Coords can appear "ita" if not well made. 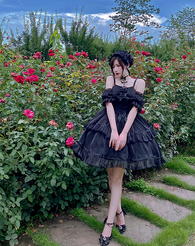 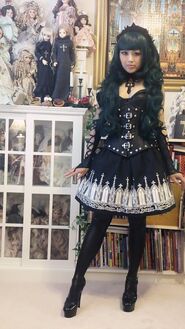 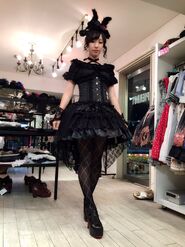