グロロリ
Guro Lolita (グロロリ) is a style of Lolita that focuses less on sweetness or elegance and more on horror.

Blood splatters, bandages, eye patches, and fake bruises are all common themes in Guro Lolita. The idea of the 'broken doll' look is a running theme. Outfits are usually black or white and feature prints that often emulate the appearance of the dress being soaked or stained by blood. Despite its gore and horror theme, it still retains its theme of innocence and doll-like look. An alternative to a blood splattered dress is to be bandaged up.

Although Guro Lolita may sound costume-y, just like other Lolita styles it is a part of a fashion, and not a costume, and follows all of the guidelines that the other styles do. This style really is not acceptable for most Lolita group activities, such as brand events and tea parties, unless they are horror themed.

Makeup for this style is really up to you, as long as you're still fairly modest the sky is the limit. 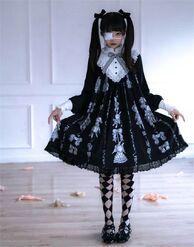 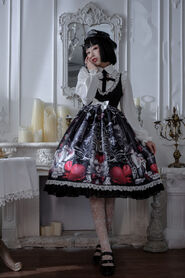