森ガール
Mori Girl (森ガール) is a japanese vintage fashion that centers around an appearance that is inspired by living in the woods.

This style has undergone many changes since the height of it's popularity, but the basic appearance still remains the same. It combines clothing that appears natural, girly, folklore, and bohemian. There are many loose layers that hide the the body shape, and the term "yurufuwa" (ゆるふわ) is often used to describe it's fluffy appearance. Clothes with embroidery, rustic crochet, and light materials are preferred and for layering, cardigans, vests, and collars are often used. Besides off-white, earth tones such as navy blue, khaki, beige and brown are used. The hair and make-up matches the outfits in that they appear natural. The popular eye shadow options are beige, gold and pink. The blush is often highly placed and round. The eyebrows are thick and natural. 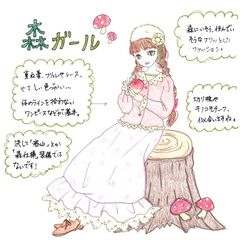 The Anatomy of Mori Girl (mynavi.jp) 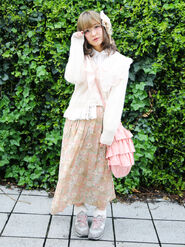 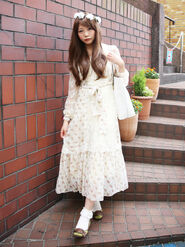