ナチュロリ
Natural Lolita (ナチュロリ), also known as Mori Lolita, is a style of Lolita that is the combination with Mori Girl which revolves around natural and vintage materials. The name and style was first coined by the brand MiELette Tautou.

Natural Lolita is a primarily Lolita-based substyle, and as such, follows many of the traditional Lolita rules on silhouette, skirt length, and so forth.

The mori elements of Natural Lolita are minimal, and focused on some additional layering, usually in the form of ruffled skirts or scarves, as well as a heavier use of natural imagery and materials, and lace.

Generally, the style resembles Country Lolita, and can be hard to distinguish. Combinations of mori and lolita was also a shorter-lived fad, so it was never truly fleshed out and was quickly absorbed into other styles. 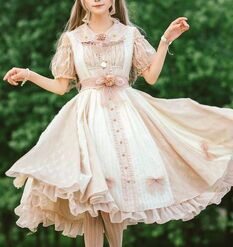 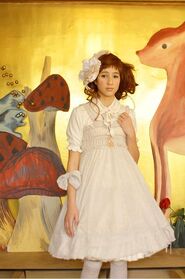 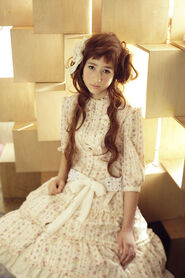