懐古ロリ
Old-School Lolita (懐古ロリ), also known as Traditional Lolita, is a style of Lolita that is the original version of the fashion, from before prints were standard. Despite its age, it is still frequently worn in this day and age, and various brands still make special releases dedicated to it, much to the delight of nostalgic veterans.

Old-School dresses and jsks are often simpler than the newer dresses. They are less print based and more design based. If prints are used, they are usually a simple floral or all over design, border prints were very uncommon unless they were embroidered or screen printed. Black and white designs are common in Old-School Lolita, as long as the lace is of decent quality and the actual design of the dress is good, this is accepted.

There are several colors that are not typically seen in Lolita as often that are somewhat iconic of Old-School Lolita, these being a dull salmon pink and a light blue that is more vivid than the baby blue you often seen in Lolita today. Reds tended to be more vivid as well. Solid colors were almost never mixed with anything other than white, unless it was an all black coordinate.

The iconic headwear of an Old-School Lolita is the headdress, especially since they have since fallen out of popularity.

Lace topped, knee high socks were the legwear of choice in Old-School Lolita, these were generally in a single colour, although sometimes striped socks were worn.

Platforms or chunky soled shoes were favored over any other for all styles. Shoe colors were also almost always limited to either black or white, black often being commonly seen in outfits regardless of what color the rest of the outfit was. Offwhite, red, and brown shoes were also used, if uncommon. Almost never seen were the rainbow of shoe colors seen now, and matching shoes to dress color was not considered necessary.

The natural look was favoured in Old-School Lolita, wigs were not as common with Old-School Lolita, unless they were of a more natural color and style, the exception being spiral curl ringlet wigs. Hime cuts were also popular in older Lolita styles. Makeup was often very simple, natural, and fresh looking. However, Gothic Lolita was sometimes seen with dark red lips and smokey eyes. 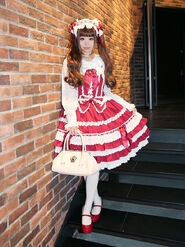 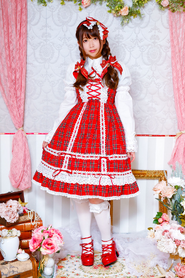 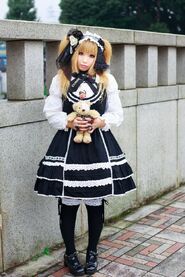 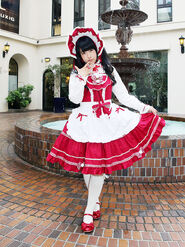