乙女
Otome (乙女) is a japanese maiden-like fashion as well as a lifestyle based around traditional girls' hobbies. It originated in the late 1970s and is often refered to as one of the predecessors of Lolita fashion. The term is japanese for "maiden", but this meaning was diluted over the years due to association with female otaku culture.

In western circles, the name is often misused for Casual Lolita being worn without a petticoat.

There usually are 3-4 layers consisting of blouse, button-up dress or skirt, vest or cardigan, and underskirt. The clothes are mainly made from light fabrics, but because of the many decorative accents and long lenghts, the weight will be heavy when layering too much, and also makes it quite hot to wear during summer. There's also accessories in the form of handmade brooches.

Despite being frowned upon in most other fashions, it shouldn't be considered a bad thing. One of the unique features of Otome fashion is to match various patterns with each other, but also to combine opposing elements. Of course you don't explicitly need to create this kind of outfit, but it's considered as iconic. For example, you can add a matching color sukajan and sneakers to a cute, frilly outfit. However, it's much easier for beginners to just put a simple outfit together.

As mentioned before, matching a pattern with a different pattern is also very common. For example, you can unbutton the skirt part of a floral dress in order to show off a polka dot skirt that is worn bellow or layer a gingham vest above the dress. This kind of combination is considered "impossible" in mainstream fashion, but if you're good at it, you will archive an iconic Otome outfit. Having said that, there are some people that don't like this type of outfit, and simply wear clothes with matching patterns instead.

One of the most important parts of Otome is the lenght. The dresses and skirts are usually way longer than the ones in Lolita, and if you're a small person, it's not unusual for the trim of your outfit to touch the floor. There's also no particular need to wear petticoats, but there are some Lolitas who want to wear them because they are used to it. If you wear a poofy petticoat under the skirt part of an Otome outfit, it will look strange and bulge in various places. In order to create a beautiful silhouette naturally, it's best to use a more modest petticoat with the same lenght as the skirt part. 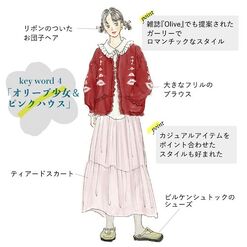 The Anatomy of Otome (mynavi.jp) 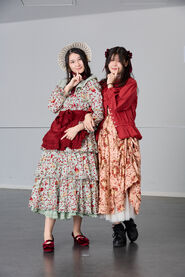 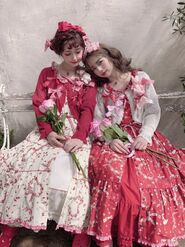 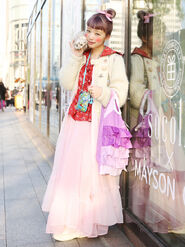 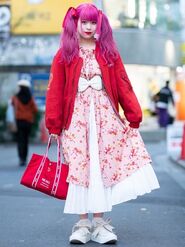 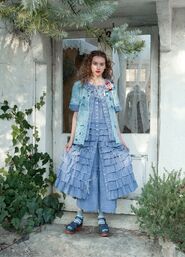