スチームロリ
Steam Lolita (スチームロリ) is a style of Lolita that is the combination with Steampunk fashion which is a western style that revolves around a futuristic victorian era.

Steam Lolita takes elements from both into the outfit, including Lolita's trademark silhouette and details, as well as Steampunk's trademark props and accessories. The color palette is generally inclined to the colors usually used in Steampunk, such as brown, cream, or bronze.

Steam Lolita is often considered more of a special occasion outfit, because due to it's highly thematic and prop-centric style, it can appear costume-like and not normally suited for daily wear. However, giving it's somewhat Classic Lolita inclined aesthetics, it's not difficult to work a few minor Steampunk elements into a Classic Lolita coordinate and wear Steampunk inspired coordinates on a more casual basis. 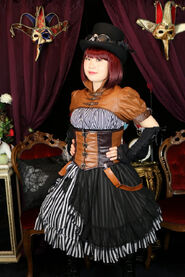 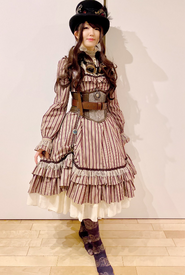 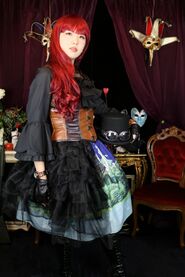